The Rónaőrző Society for Nature Protection (former name: Dél-Nyírség Bihari Landscape Protection Society) is an environmental Non-Governmental Organization in Debrecen dedicated to the protection and preservation of the Eastern and North-Eastern region of Hungary, located mainly in Hajdú-Bihar and Borsod-Abaúj-Zemplén Counties.

The area has several and diverse natural values like Hortobágy and Bükk National Parks and the Hajdúság Landscape Protection District composed of stepps and forests, wetland habitats and open plains interspersed with traditional Hungarian farms, small towns and willages.

The largest population center is Debrecen and Miskolc.

The Society was founded in 1995 in response to a growing concern over the preservation of natural resources in the area. Beginning in the early 1980s, local conservationists and biologists began an informal series of species surveys, inventories and re-plantings; summer camps were organized to promote interest in the area. These efforts resulted in the founding of the organization which now numbers abut 30 members, most of whom are professional conservationists, biologists and botanists; and some are members of the staff of the Hortobágy National Park. The membership has successfully applied for grants, for example from the Ministry of Environment, the Duna Program at the Regional Environmental Center, Econet Action Fund, ÖKOTÁRS Fund, Norwegian Fund, Interreg Found, National Civil Fund and others.. This money has been utilized for habitat acquisition, resource inventories, informational signs, presentations and a photo exhibitions on the area and a summer camps for children, etc. A small amount of funding for the group’s activities also comes from membership dues.

The goals of the Society as stated in their application for official Hungarian NGO status, are as follows :

To achieve these goals, the Society has established the following objectives:

To address these objectives, the Society initiated different campaigns like Stewardship or Sustainability Program.

Most recently the Society started an amateur astronomical educational program and a public awareness campaign in light pollution. 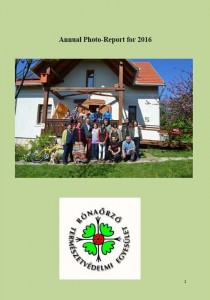